iOS app localization, the term is almost self explanatory to most of the mobile developers. If you are not aware of app localization then with app localization, it means that an app ability to support multiple languages. Since the majority of people in this world speaks and understand their country native language and English is not their primary language. So in order to reach more audience we need to localize the app to different languages and this can be achieved using app localization. In this
tutorial, we will earn how to localize iOS app.

There are two ways with which we can allow app user’s to change app language
1) App language will be same as the device language(This is the default system on which iOS works). The main limitation of this approach is that if someone is not interested to change device language but he wants to change a particular app language.
2) Change app language from inside of the app. With this technique, we can allow users of our app to switch to different languages without changing or interfering with device language.
If you are interested in first option then please visit this post
https://iostutorialjunction.com/2015/03/How-to-add-localization-to-your-IOS-app-Tutorial.html
In this tutorial, we are going to cover second option for app localization in iOS app. Please follow below steps

Steps to change app language and user interface design of the app from inside of the app, without changing device language

Step 1: Open Xcode, and create a single view application project, name it “Localization-Tutorial”.
Step 2: Adding another language, English language is default development language. Follow steps as shown in images below to add other language support for the iOS app 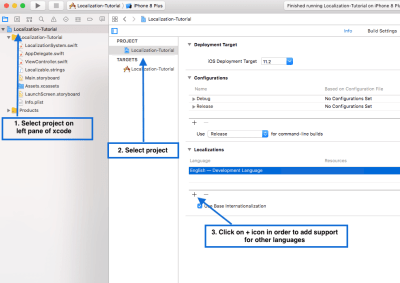 As we click on ‘+’ icon a pop up will comes up with the listing of different languages, we will select ‘Arabic language’. We are covering Arabic localization in this tutorial

After  selecting ‘Arabic’ as second language that our app supports, Xcode prompts with a popup showing that its going to create Localizable.strings files for Main.storyboard and LaunchScreen,storyboard. Click on finish button. 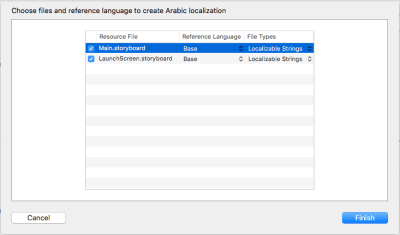 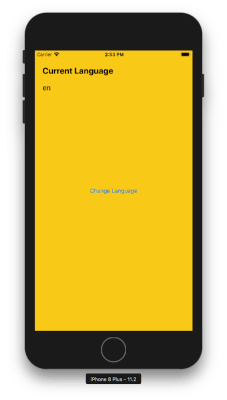 The UI(User interface) has a header label, current language label, and change language button at center of the screen.
Open main.storyboard and in ViewController’s view drag a UILabel (acts as header label) and give it constraints as shown below

Finally drag a UIButton, so that we can change app language on clicking or tapping on it. Give it constraints as shown below

Step 4: Open ViewController.swift and create IBOutlet for UILabel’s, UIButton we added to main.storyboard and an IBAction that will trigger language change.
Step 5: Open Main.storyboard and connect the IBOutlet’s and IBAction to respective UIControl’s i.e. UILabel’s and UIButton
Now we also developed user interface for the app, but there is one doubt how can we get different text for UILabel’s and UIButton for both Arabic and English languages. Here come’s localizable.string file for the rescue. 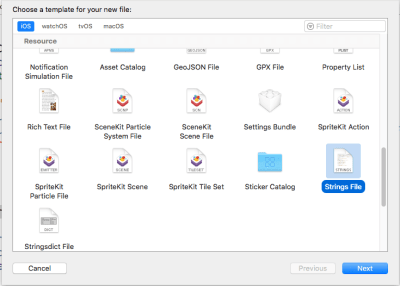 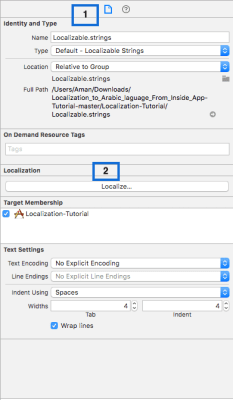 On pressing Localize button, xcode will prompt with a popup, select ‘Arabic’ from dropdown menu  and click Localize. Now on your right hand side pane instead of Localize button you will see the image as shown below (Check mark the English checkbox if not checkmarked)

Format supported by strings file is a “Key” : “Value” format. Key should be same in both files (i.e. in Arabic strings and in English strings file). Let us populate both strings files

Changing app language from inside of the app

In order to change app language only without changing the device language, or language will changed from inside the app via providing an user language options. We have to override the default language preferences for our app and then load the app bundle as per the language in app prefrences and thus loading the correct localized values.
For changing the app language from inside of the app and reflecting the language change we will use
“LocalizationSystem.swift” file. In this file we have different methods that set language preference for our app and load the bundle as per our language preference. Also we will get new methods for fetching the localized text from our localizable.strings file.
Step 6: Open ViewController.swift file, and add the below code

In above code, we used “LocalizationSystem” file in order to get the localized text from teh “Localizable.strings” file. In the “changeLanguage” IBAction, we will change the language as per teh current langauage. If app language is “English”, we will set app language to “Arabic” and vice versa.
Finally, we reset the rootViewController of our app using a new instance of “ViewController”, this is required in order to reflect the UI(user interface) changes.

Run your app and see you can now change app language form inside of the app, without changing the device language.

In this tutorial, we learned about localization in iOS app and how can we change the app language from inside of the app without changing the iPhone device language form settings app of the iPhone.
You can also download the source code used in this tutorial from here Source-Code